Today there are different types of conveyor beltsthat have been created for conveying different kinds of material available in PVC and rubber materials. Material flowing over the belt may be weighed in transit using a beltweigher. Belts with regularly spaced partitions, known as elevator belts, are used for transporting loose materials up steep inclines. Belt Conveyors are used in self-unloading bulk freighters and in live bottom trucks. Belt conveyor technology is also used in conveyor transport such as moving sidewalks or escalators, as well as on many manufacturing assembly lines. Stores often have conveyor belts at the check-out counter to move shopping items, and may use checkout dividers in this processs. Ski areas also use conveyor belts to transport skiers up the hill. Industrial and manufacturing applications for belt conveyors include package handling, trough belt conveyors, trash handling, bag handling, coding conveyors, and more. Integration of Human-Machine Interface(HMI) to operate the conveyor system is in the developing stages and will prove to be an efficient innovation. 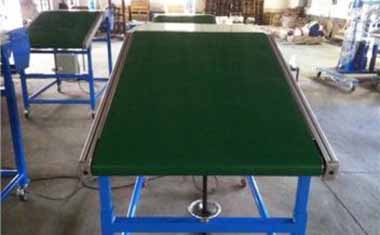